The Flyers of Papantla

The Flyers of Papantla

The flyers of Papantla or Los Voladores de Papantla is a group of five men from the city of Papantla in the northern part of the Mexican state of Veracruz. The flyers are the Totonaca people. It is believed that the ritual they are performing was formed sometime in the 1200s.

Five men represent the five elements of the indigenous world. They climb on top of almost 23 metres high pole. 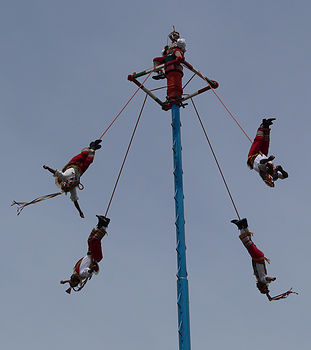 One man called the caporal stays on the top playing a drum and flute. He performs without a rope of safety net. Other four men are secured to the pole with a rope tied to one of their feet.

There is a Totonaca legend behind the ritual. Long, long time ago there was a terrible drought. That is why five young men decided to send Xipe Totec (the God of fertility) a message, asking for the rain.

How did they do it? They went to the forest where they found the tallest and straightest tree. They stayed with it overnight. They fasted and prayed for the tree’s spirit to help them.

The next day they blessed the tree, cut it and brought it to their village. While carried the tree never touched the ground. When they found the perfect location for the ritual they finally put the tree down. They cut off all branches, dug a hole to stand the pole they made upright. Then they blessed the site with ritual offerings.

The decorated their bodies with feathers so they would look like birds to Xipe Totec and draw god’s attention. They wrapped vines around their waists and tied other end of vines to the pole.

In the Mesoamerican times the ritual of Volador existed in most of today’s Mexico and even in areas far south as for example Nicaragua. It was organized once every 52 years at the change of the century. The brotherhood of the Voladores was passed from father to son.

Finally let’s mention one more interesting fact about the city of Papantla. Vanilla was first discovered by the Spanish conquistadores in Papantla in 1524. This famous aromatic spice had been cultivated by the Totonaca Indians for centuries.